I just got back from a vacation, and I’m having trouble with the iCloud Photo Library. I’ve seen this issue once before: my iPhone reports that there are X photos to upload (22, this time), but it just will not upload them. Apparently I’m not alone in this. 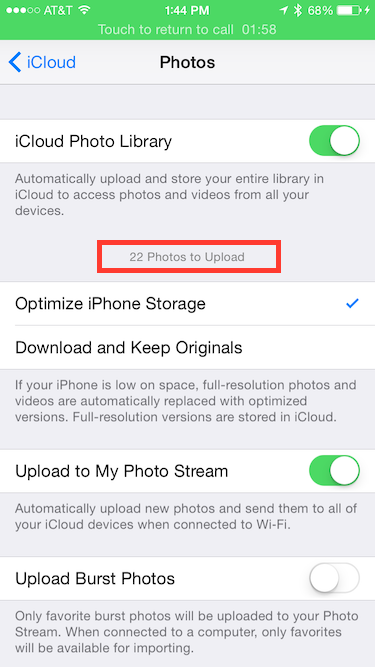 I waited five days for the photos to sync up. In that time, my phone has been connected to power and a few different Wi-Fi networks, but the photos never uploaded. Today, I finally called Apple Support.

Before I go through the steps Apple had me go through, I should detail the state of my photos:

The gentleman I spoke with at Apple was great. He started researching the issue, and took me through a series of troubleshooting steps:

This concerned me. I knew the first class of photos (those that had already synced) were safe - they were on Time Machine backups and a Carbon Copy Cloner duplicate. The third set of photos were also safe1; I copied them off the phone via the Image Capture tool. I was most worried about the second set of photos - the unsynced edits to synced photos. There was no obvious way to back these up.

Without a better option, I flipped the switch. I was prompted to “Remove from iPhone” or “Download Photos & Video”. Downloading wasn’t an option, since my library is about 70GB and my phone is only 64GB. It took some time, but I saw the photo count in the Photos app plummet from ~16,000 down to ~60. I flipped the switch to turn the library back on, and the count started going back up.

It took about three hours to get all the way through the process of purging and resyncing, but it worked. All of my data was preserved, including those edits I was worried about.

I filed a Radar against this issue. If you’ve seen the problem, please duplicate it!