Based on the glowing Pitchfork review of the new Eno • Hyde album High Life, and being a lifelong Brian Eno fan, I downloaded the album from Bleep. I chose Bleep because I try to only buy lossless music1, and they offered both 16- and 24-bit versions of the audio.

I was really curious to see what the difference between the 16- and 24-bit versions was; my hope was that the sessions were handled at 24-bit and in mastering they just dithered down to 16-bit to produce the CD master. I figured I could just load up two versions of the same song in MATLAB and take the difference.

This gist shows what I did, which was straightforward:

This is the plot generated by that code: 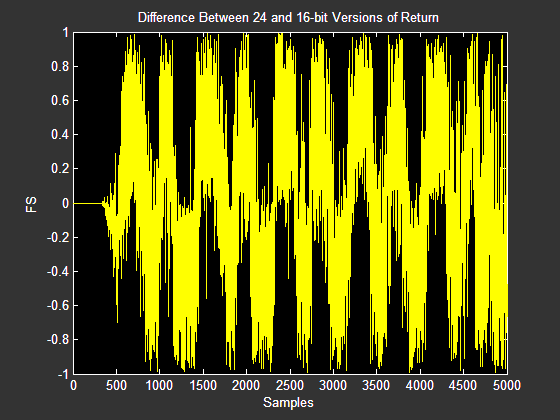 To me, that looks like a really noisy audio file. This makes sense. My guess would be that the 24-bit version represents 23-bits of audio plus 1-bit of dither, and the 16-bit version is the same with 9-bits of dither, truncated down to 16-bits. Taking the difference then would give us the original audio contained in those last 8-bits, but there will be noise of approximately equal energy.

Conclusion: There’s real value in purchasing the 24-bit audio, assuming you have a decent system2 for playing it back.