I just returned from a trip to Portugal with my wife; she was lucky enough to spend two weeks as a TA at the Disquiet literary conference, so we tagged a week of vacation on to the end of the trip. Since we’re lost without our phones, there was no question as to whether we would bring them. The challenge was to minimize the cost to us.

This guide presents my planning for our trip, and probably will only be useful for other American AT&T iPhone users. This information was accurate as of July 2014. It’s long, but hopefully thorough enough to be useful.

I think it’s helpful to consider three main parts of your phone service, and what you’ll need while traveling.

We decided we didn’t really need access to standard phone service while we were traveling. We were both fine just having our calls dump to voicemail and leaving them alone until we were home. Everyone important knew we would be out of the country and weren’t expecting to be able to reach us by phone.

Our plan was to use FaceTime and Skype to make data-only voice or video calls. This requires a little more advance scheduling, but seemed workable.

As a side note, I tried using the Google Voice app for this purpose a few years ago while we were in Dublin. I used it once and quickly realized it was dialing using the standard phone mechanism, so I aborted and deleted the app. I haven’t tried this again recently; maybe it would be an acceptable alternative at this point?

With the abundance of free messaging services, and the high costs of international SMS, this wasn’t a priority for us either. My wife uses WhatsApp with one friend, and beyond that we use iMessage with all of our friends and family. Those services work on data only, so we don’t need SMS access abroad.

Data access is the whole reason we cared about using our phones abroad. We expected to find Wi-Fi almost everywhere, but we were planning to be driving and navigating a lot, and, turns out, I don’t really remember how to do that without a phone. My wife would be trying to get around Lisbon a lot on her own, and just having a map isn’t useful to her - she needs to see her dot moving around to know if she’s headed the right way down the street. Data access is critical for this1.

Put the phones in Airplane Mode and only use Wi-Fi

I think it’s still something of a secret that you can use Wi-Fi while in Airplane Mode. You can turn Wi-Fi and Bluetooth back on by just tapping the buttons in Control Center. 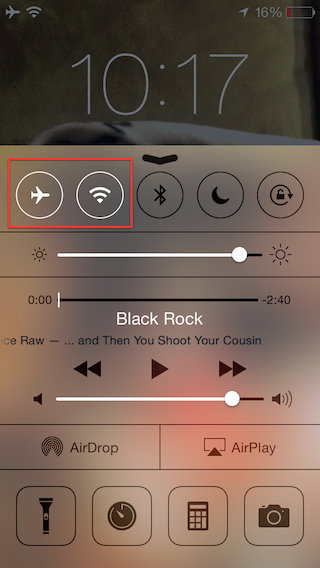 This would address our needs except for data access. FaceTime, Skype, iMessage and WhatsApp would all still be fine while we’re in Wi-Fi, so we would still be able to communicate.

Since the GPS is tied to the cell radio, any pictures you take in Airplane Mode will probably be missing geotagging metadata. I haven’t tested this, but it seems likely to be the case.

Use services from AT&T

With AT&T, international phone calls are expensive. Since that’s not a service we were interested in, that’s fine - we can skip phone calls. There is a problem with this, though. Even if you never place a call, or answer an incoming call, if your phone rings and you let the call go to voicemail you will be billed at an international rate for the time used to leave a message. The best solution I found for this is to activate call forwarding before you leave the US, to prevent calls from ever hitting your phone. If you only have a cell phone, what number should you forward to? How about your voicemail? These instructions guide you to call *#67# on your GSM phone to find the direct dial number for your voicemail.

According to AT&T, the family SMS plan we have includes free receipt of text messages while we’re abroad, so there’s no concern here with leaving the service enabled. Sending texts is still expensive, but we can just opt not to send any. Since most of our friends use iMessage, we could just deactivate the setting for iMessage to fall back to SMS, to avoid accidentally sending any SMS messages. 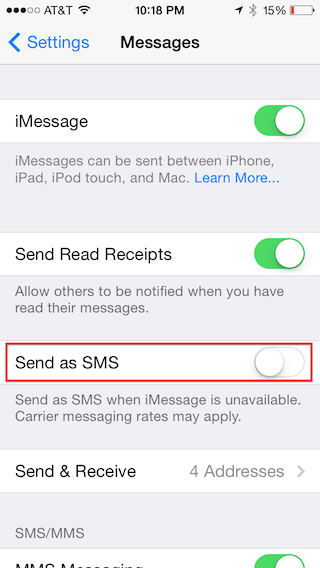 The only thing to still be careful about is not responding to those green messages, since those are contacts without the iMessage service. 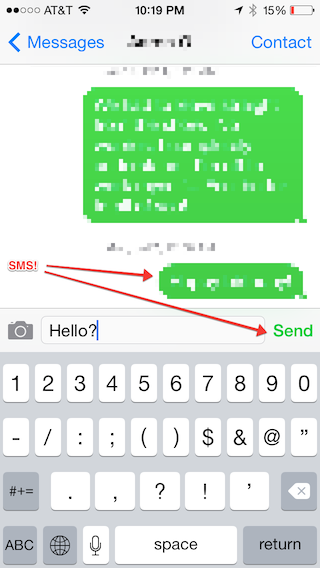 AT&T will happily sell you overpriced international data. As of July 2014, it costs about $30 for 120 MB of data, and $60 for 300 MB. All that you need to do to access this is enable international data roaming (after adding the service to your account). You can also use the Cellular panel to monitor your data use and disable certain apps that you don’t want consuming your precious, overpriced data. 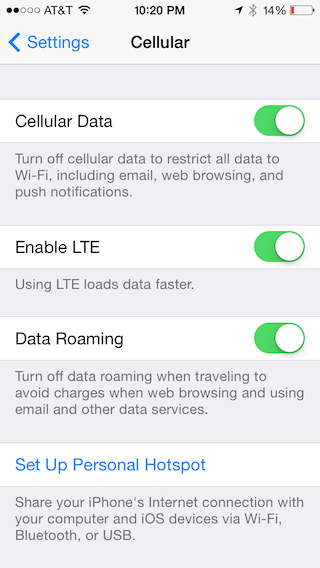 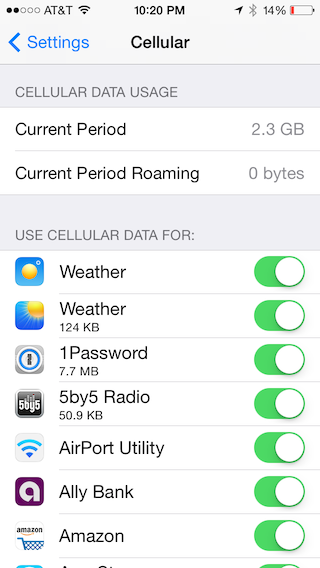 If you’ve had an AT&T phone long enough to pay off the cost2, AT&T will allow you to unlock the phone. I think it may be the case with Verizon that the SIM slot is unlocked from day one, but I don’t have a device to try it with.

You can request an unlock from AT&T. Once you’ve received an email confirmation of your unlock, you’ll need to do a backup and restore of your phone from iTunes. I recommend an encrypted backup, because that will restore your passwords in addition to your data, simplifying the process a bit. After a successful restore, you should see a message saying something like “Congratulations, your iPhone is unlocked”.

I did two restores without seeing the “Congratulations, your iPhone is unlocked” message in iTunes. I ended up calling AT&T and receiving a second confirmation email. On the third restore, I backed up, and then used the “Erase all Content and Settings” function on my phone, and then restored the backup. I finally saw the success message. Note that a backup and restore can take a long time - two or more hours, in my case - so plan ahead!

Once you have an unlocked phone, you can purchase a SIM card at your destination and pay much more reasonable fees for data. In Portugal, Vodafone offers GO Plus. For €15 you get 1 GB of data, good for 30 days, with a SIM card.

For phone calls, you’ll have a different number. All calls to your old number should just dump to voicemail, which is exactly what we wanted. If you don’t give out the new number, there are no issues with incoming calls.

The same is true with text messaging. Since you’re using a different number, you won’t see messages sent to your old number. I’m not sure if SMS messages sent to the old number are retained for later delivery, but iMessage should work just fine.

My wife has a one year old iPhone 5S that AT&T would not unlock. She also has an old iPhone 4 with a failing home button which I have unlocked. We considered sending her with both phones so that she could use her 5S in Wi-Fi, with call forwarding on and international data roaming disabled. That would keep her from incurring any additional costs from AT&T. She could then buy a SIM card for the old iPhone 4, and have data access there for navigation, email, and messaging as needed while away from Wi-Fi.

The cost difference between 1GB of data on the unlocked phone (at €15 from Vodafone) and 120 MB of data through AT&T (at $30) was small enough, and she was convinced that she could live in 120 MB for two weeks (she usually uses less than 300 MB a month). We decided to just pony up for the AT&T data, so she would only have to manage one phone on the trip.

I have an almost two-year old iPhone 5 which AT&T told me I could unlock. Since I’m adventurous, I planned to buy the Vodaphone SIM card at the airport and avoid paying AT&T anything. That would be our primary navigation device, and I could broadcast a personal hotspot to my wife if she needed data beyond her 120 MB cap.

How it worked out

My wife ended up burning through her 120 MB of data pretty quickly. By that point we were committed - since she didn’t bring the old phone with her, and she still needed data for navigation in Lisbon, we bumped her up to the 300 MB for $60 plan. Since we made that change mid-month, my hope is that we can cancel it at the end of the cycle and pay a pro-rated amount. She kept her total data use under 190 MB, which was what my back-of-the-envelope math3 indicated the pro-rated data cap should work out to.

I bought the Vodaphone GO Plus package for €15. Using it was pretty straight forward; the gentleman at the store in the Lisbon airport popped it in and showed me where the 4-digit pin was on the package. I was off and running.

I did run into a couple unexpected behaviors, though. At one point I rebooted the phone and I was presented with a Locked SIM prompt, requesting the 4-digit pin again. Fortunately I still had it, but this is something to be careful about (and keep track of). Messages also kept prompting me for a phone number “to be able to use iMessage”. I entered the new phone number associated with the SIM and it stopped yelling at me, but I also stopped receiving messages to my original phone number. Hopefully this resolves itself easily once I put the original SIM back in.

Our total expected cost is $42 plus €15. If AT&T doesn’t surprise us with any unexpected charges, I would definitely do the same routine next time. Access to easy communication with our families back home and the simplicity of data for navigation made that cost more than worthwhile to us.

If you’re looking at upgrading your iPhone, consider keeping an older unlocked iPhone around if you’re planning any international travel.

Be sure to consider the three main parts of your phone bill (phone, SMS, data), and make sure you have a solution that will keep you from being surprised on all three fronts. Call AT&T and discuss your plans if you’re unsure. But also keep in mind that the customer service reps at AT&T probably know less about this than you do, now, so be sure to double check anything they tell you. A quick search usually turns up a recent ton of information on this subject.