Kirk McElhearn wrote about the messed up state of Apple Music metadata, and he used the Ultimate Sinatra collection as his example:

When I first added the Ultimate Sinatra album to my library, it was a single album, but it changed after a while. I surmise that iTunes matched the tracks and found that many of them were on different albums. Just as iTunes often matches tracks from studio albums to “best of” albums, here, it’s matched some tracks to the album I downloaded, and other tracks to whatever iTunes found first. But, of course, iTunes shouldn’t match Apple Music tracks; it only matches your music, that you’ve ripped or downloaded, and added to your iTunes library.

I actually added this album to my iTunes library about two months ago. My process for importing music from CD is:

Once I read Kirk’s article, after the panic subsided, I opened up iTunes to see what Apple Music might have done to the tags on my copy of this album. To my surprise, the metadata seems to have been unaltered since I imported it into iTunes: 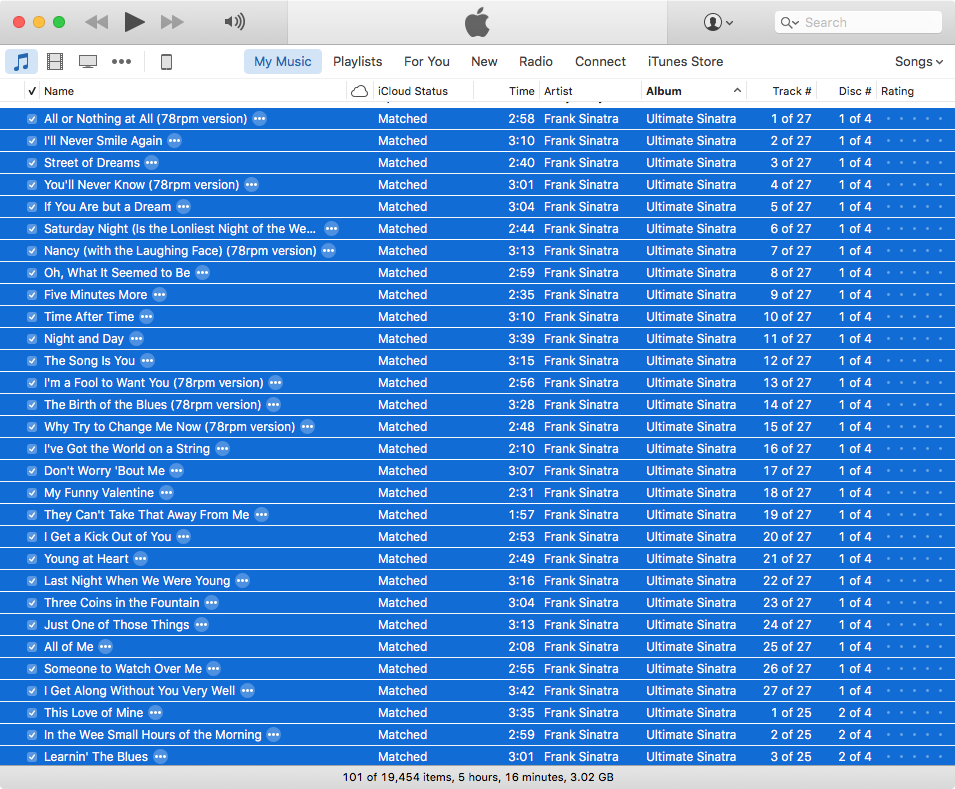 It’s the unpredictability of Apple Music that most scares me. That Kirk and I can have such wildly varying experiences (with the same album!) does not bode well for the back-end of Apple Music. I haven’t done it yet, but every month I consider canceling my Apple Music subscription out of fear that it will destroy my music library.

If there was an easy way to use iTunes Match with my main library, and run Apple Music in a separate library, I would probably do that. Since they’ve merged the back-ends of those two features as iCloud Music Library, I don’t believe that’s possible. So I make regular backups, and I’m hoping I’ll still have a good backup around once I figure out which of my 19,454 songs have been corrupted by Apple Music.