At CES earlier this year, Meridian announced their new MQA audio format. Supposedly the problem they’re trying to solve is that of packing high-quality audio into low(er)-bandwidth audio streams. I’ve been hearing grumblings that they may have made some fairly questionable decisions regarding data prioritization1, so I was searching for any technical data they may have released.

This post isn’t actually about the technical implementation of MQA, though. It’s about the absurdity of their marketing materials for MQA. In particular, this graph set me off: 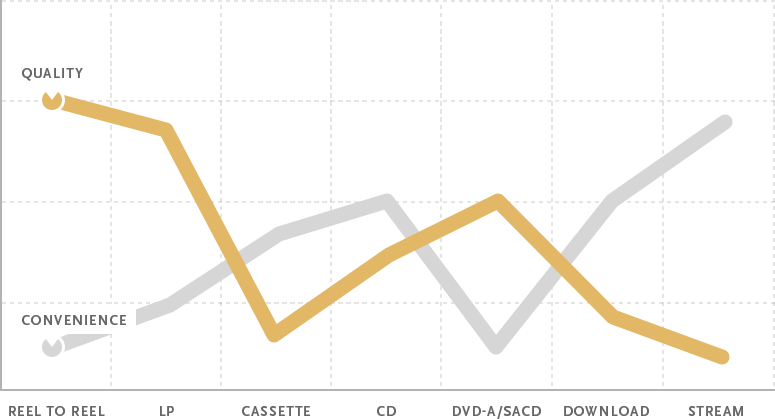 There are so many things wrong here. In what world do DVD-A, SACD or even just regular old CDs have lower quality than LPs? Let’s just look at frequency response and dynamic range. LPs generally only contain frequency information up to 20KHz2. All three digital storage forms exceed that, with DVD-A and SACD blowing it out of the water. LPs typically have a dynamic range of only 60-70dB3, while CDs can store 96dB, and a DVD-A disc with 24-bit audio stores 144dB (wider than the range from the threshold of pain to the threshold of hearing!).

I also take issue with the convenience plot. I can’t accept that DVD-A and SACD were less convenient than LPs. You may not have had portable music players that could handle either format, but you were a lot more likely to be able to listen to DVD-A/SACD in your car than LPs. And downloads have been far more convenient than CDs from the introduction of the first iPod, which could hold the equivalent of ~7 CDs (when ripped at CD quality) in physical volume of just one.

At the end of the day, this marketing is just playing up to tropes in the audiophile world. I know that. I shouldn’t let it get to me like this. But I also can’t accept an audio format that’s predicated on misinformation as opposed to a strong technical foundation.