My wife’s car spent a good portion of its winter sheltered on a lift at Durand Chevrolet, so I wasn’t very surprised to see a letter from them arrive the other day. It only took a fraction of a second to figure out they were just trying to get her back in the showroom to sell her a new car. It took just a few seconds longer to realize that it wasn’t just an obvious ploy, but an outright fabrication.

First, note the date it was processed by the post office:

April 10, 2014. Comparing that to the date the suposed email was sent/printed: 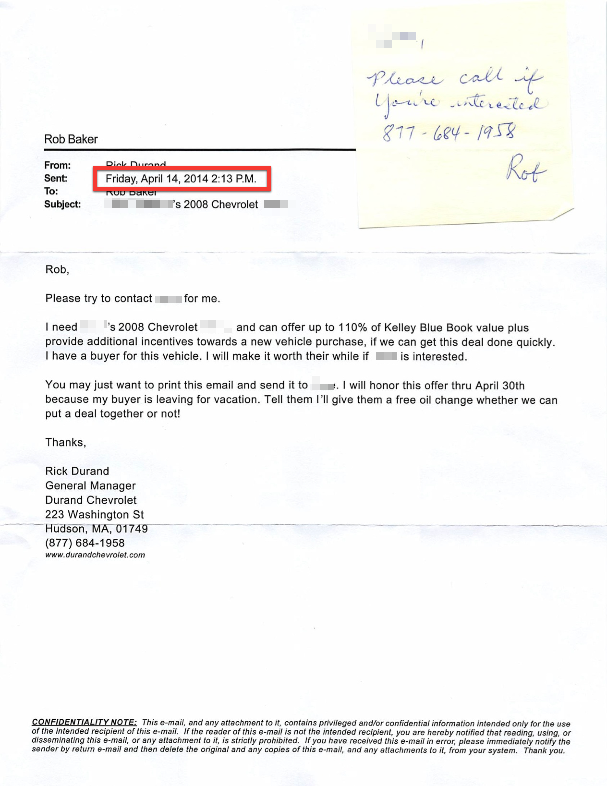 April 14, 2014. Unless GM is now selling time machines, this is impossible - the letter was processed four days before that email was written. My favorite detail is the day of the week. April 14 is a Monday this year, not a Friday. I would have assumed they were using a program specifically tailored to crank out these letters, but that detail makes me think someone just tweaked a Word document by hand.

I find the sloppiness more insulting that the obviously deceptive sales pitch. Rob Baker probably won’t be getting any business from us (and not just because we’re not in the market for a car…).

I was trying to explain to a friend why I hate the experience of writing in Microsoft Word. I couldn’t convey it last night, but thinking about it this morning I believe it has to do with the extent to which the tool gets in the way of the writing. There’s so much to manage in Word that I find it hard to focus on my writing1. Instead, I end up in an epic battle of paragraph, character, and style formats that feels more like a war of attrition than an enjoyable task.

I went looking for an image I remembered from David Pogue’s 2006 TED Talk, Simplicity Sells. I think this represents my problem with Word perfectly: 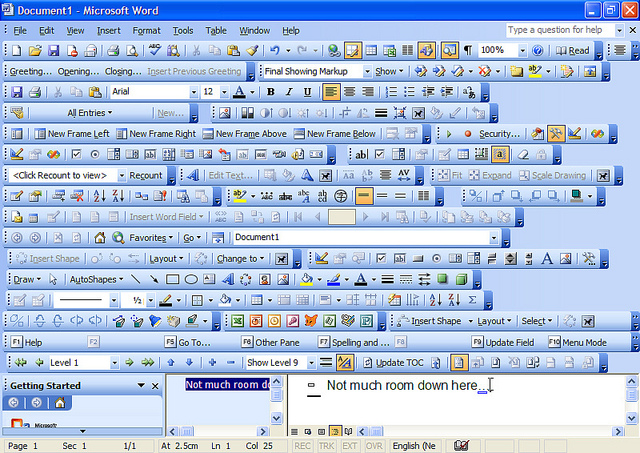 That’s taken to an absurd level, but even with just a few menus showing I have an ominous sense that I’m using the wrong tool. In contrast, a tool like Byword just feels out of the way. I’m able focus on the text without worrying about whatever it is all those menus do in Word.

My band, Sleep Studies, finally released some songs we’ve been working on for years. Check them out! You can stream or purchase them from Bandcamp.